Information and News for the People. If You Are Silent, Others Will Speak For You!

Students and supporters rally alongside Mussab Ali and Kimberly Goycochea, two recent graduates of Jersey City Public Schools whom intend to fill seats as board members for the Jersey City Board of Education after this year’s upcoming election, for a brief rally in support of students needing a voice within the school system held in Journal Square at the foot of 3 Path Plaza.

During the rally Mussab Ali brought up the point that the noticeably large structure  has received a twenty five year tax abatement that takes away from  Jersey City student’s education, and also pointed out that while multi-million dollar tax abatements are given to developers there are many hungry and  homeless within the Journal Square district itself.

After the rally Mr. Ali lead the small group on a brief walk to P.S. #11 for the Citywide Board of Education meeting where they stood in solidarity with P.S. #34 students, parents, and community leaders to have their school named after President Barak Obama. 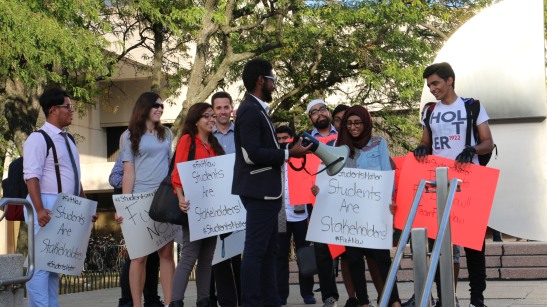 Mussab Ali gives direction to supporters as they prepare to walk in peace to P.S. #11 for the Citywide Board of Education meeting, in Jersey City

Students and Supporters at P.S. #11 to have their voice heard during the Board of Education’s first Citywide Meeting since back to school on September 8th.

Students attend Jersey City Board of Education Citywide Board meeting at P.S. #11 on Thursday, September 15, 2016

This entry was posted on September 16, 2016 by HudInfoNews in Information.